“It was a presence – an imaginary shape or essence from the human multitude lying below: those who had gone down in vessels of war, East Indiamen, barges, brigs, and ships of the Armada…”

Peering down onto Chesil Beach from the heights of Portland Bill, the imagination takes flights of fantasy. Can there be a more striking maritime landscape in all of Britain? The romantic inspiration for realms of poetry and prose, far less known is this famous Dorset landmark’s infamy as a sprawling ships’ graveyard.

Chesil Beach is a natural trap for flotsam and jetsam, and was grimly renowned for the shipwrecked bodies washed up onto its shore. Thomas Hardy called these waters Deadman’s Bay. The Dead House where bodies were laid to rest still stands at the back of Chesil Cove.

Around 200 vessels from all nations met their fate along this 18-mile bank of pebbles running westwards from Portland to Burton Cliffs. In July 1588 a captured Armada ship, the San Salvador, sank here, as allegedly did the Isobel privateer alongside 20 other ships in a single storm on Christmas Day 1600.

A Golden Fleece in 1706, a Charming Molly in 1754 and endless other ships grounded on the ever-shifting pebbles into the 20th century, spilling onto the beach and the open arms of local wreckers their cargoes of tobacco, copper, tin, raisins, salt, wine, slate, timber, cloth, wool, sugar and shale.

While the sailing world converged on the Portland Harbour Olympic venue in summer 2012 a few paces east of Chesil across the beach, the ink had just dried on Selwyn Williams’ book describing one of the most colourful and important ships ever to meet its maker in these waters. Hardly surprising for someone born overlooking Chesil Beach to a merchant seaman father, Selwyn’s Treasure of the Golden Grape (Deadman’s Bay Publishing, Dorchester, 2012) is clearly a labour of love. Thanks to the Dutch ship’s cargo of gold and silver, and the quite remarkable furore that swirled around its salvage over four days from 11 December 1641, this book provides a rare insight into the world of Spanish contraband trade and the lengths local wreckers went to in order to profit from misadventure – a moment in time linking two of the most evocative themes in maritime history.

The 16-man Golden Grape owned by four Dutch partners, Wesseilhen Norman, Derrick and Henrick Doomers, and Derrick Peters Redhoost, had sailed from Texel to Dover half laden with general goods ranging from pepper to cordage and ships’ rigging blocks. There the hold was topped up with tallow, more pepper, cordage, blocks and parcels of copper. Four more sailors joined the crew under the command of a new captain, Captain Thomas Redwood, for the final outward voyage to Cadiz. At war with Spain since 1621, the Dutch ship could now masquerade as an English merchant venture and sidestep the Iberian trade blockade.

In Spain everything other than the pepper was offloaded, while Spanish and Flemish merchants swiftly filled the Golden Grape with 1,019 barrels of raisins, 396 oil jars for merchants of Le Havre in France and two bags of red wool. Another merchant shipped 234 barrels of raisins for Dover merchants, while a third added a consignment of 12 butts of sherry, eight for merchants of Rouen. Gunner Robert Coast took three pipes of tent (red wine) for his own purposes.

So far so good – and above board. But soon out of Cadiz the Golden Grape swerved towards Sanlucar de Barremada, the satellite harbour of Seville, which itself was the homeport of the hugely lucrative American treasure fleet. In exchange for its 200 barrels of pepper, the Golden Grape eagerly received two bags of red wool, 43 bolts of taffeta, two bags of silver plate, a bag filled with 500 gold pistoles (Spanish 2 escudos coins), another bag stuffed with a mixture of pistoles and pieces of eight, and finally a peg and loaf of silver. Having lifted anchor the Dutch fluit was gingerly making its way back up the English Channel towards Le Havre when it grounded on Chesil Beach during a fierce gale on 11 December 1641. Seven of the crew drowned.

Word of a treasure ship in peril on the pebble beach spread like wildfire. In 1641 a list of South Dorset villages shows that just 147 men aged over 18 lived in Portland, and the majority seem to have had a finger in the Golden Grape pie. As Selwyn Williams explains from the quite extraordinarily detailed proceedings of the High Court of the Admiralty Enquiry held at Melcombe Regis in the Borough of Weymouth between 10 January and 28 March 1642 (all transcribed at the end of his book), 343 witnesses gave depositions to the Court and mentioned another 204 people involved in the scandal. No less than 301 of the witnesses, it turned out, had been on the beach at some time during the four days after the ship grounded – over twice the population of Portland.

By the time of the Admiralty Enquiry, a collective amnesia had struck Dorset. But under oath, memories slowly emerged. Arthur Grey, an innkeeper at Wyke Regis, had brought the survivors of the Golden Grape to safety and warmth. However, as his wife, Susannah Grey, testified, at night she removed the bags of treasure from a chest next to the master’s bed and handed them to her husband, who hid them in a place that she could not recall.

Back down on the shore, the steersman Cornelius Van Berkham and the boatswain’s mate recovered more gold pistoles in his hat, persuaded the gunner Robert Coast to pocket them and with a wink said “keep these and we will divide them between us”. Yet more gold and silver exchanged hands on multiple occasions in a game of layered concealment that created a climate of deniability.

A single young woman called Mary Paine of Melcombe Regis, for instance, ended up with a bag of gold and silver. Thomas Hunt and Thomas Bayly of Wyke Regis salvaged six barrels of raisins and 26 jars of oil. The list of tradesmen who just happened to find themselves on the beach in the days after the grounding of the Golden Grape surpassed the proverbial butcher, the baker and candlestick maker to include a shoemaker, fisherman, sailors, husbandmen, yeomen, masons, a carpenter, a brewer, a thatcher, a weaver, a tailor and a baker.

As Selwyn Williams’s sleuthing through obscure sources has demonstrated, it transpires that some booty ended up as far as 7 miles away at Abbotsbury. Some 172 of the ship’s 400 oil jars were salvaged as well as 535 of the 1,253 barrels of raisins. But before the wreckers could clear the hold it would seem that the greatest part of the cargo was lost when the ship broke up. 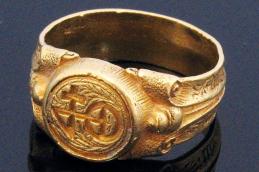 Not content with tracking down the precise spot where the Golden Grape was lost in 1641 opposite Little Bridge Farm, Selwyn also quantifies the salvaged goods taken by village and location. While diving for crab and lobsters off Chesil Beach in 1980, however, following another huge storm that completely eroded the seabed of pebbles, Selwyn linked past and present. At a depth of 15 metres, 100 metres offshore, a 20 metre-wide strip of underlying clay was exposed for at least a mile. For the first time diving these waters in 15 years, anchors were naturally exposed next to the side of an iron ship, a P40 fighter plane wreck lying upside down, and a 6-inch wide silver plate probably lost with the Golden Grape.

Since then Selwyn has been hot on the trail of this Dutch ship, following up chance finds and dead ends. In 1827, during what accounts describe as a “great convulsion of a violent gale of wind from the West”, a large volume of gold and silver bars, silver bowls and spoons came to light. Later reports described how in 1848 a poor man found a large 60-ounce piece of silver on Portland Beach. Down the decades silver sporadically washed up on Chesil Beach, including a 37-ounce, 5-inch diameter solid silver ‘pebble’ picked up and sold at Duke’s Auction Rooms in Dorchester that was probably silver smuggled on the Golden Grape. In a twist in local legend, it is said that a duck shooter found it on the beach, which inspired the name Duckey Stone for the ship’s treasures. Seine fishermen also told Selwyn about “brass bars with funny marks” that had been picked up on the beach. A Spanish lustreware plate from Valencia and other ceramic bowls in private collections all probably come from the lost Dutch fluit.

Following the contemporary salvage of 1641 and the hunt for silver Duckey Stones over the course of 372 years, you could be forgiven for mistaking the story of the wreck of the Golden Grape as dead and buried. However, in many ways it has just begun. Surely sherds from the indestructible 228 olive jars not salvaged or the two anchors, seven pieces of ordnance, two chambers and eight murderer cannon – if jettisoned – might have left an archaeological footprint somewhere under these inhospitable waters.

Last seen, Selwyn Williams and his team from The Shipwreck Project were hot on the trail of the Golden Grape’s hull using side-scan sonar. Numerous intriguing targets need following up, as do a whole host of archaeological finds including Roman coins and a Dressel 20 Baetican amphora neck. Meanwhile, Selwyn has produced a carefully researched labour of love that brings back to life one of the most exciting moment’s in Chesil Beach’s life – a physical reality of Dorset that goes far beyond the imagination of poets and novelists.

If you lie on Chesil Beach today with your ear towards the sea, you might just hear the echo of the 200 wrecks lost in these waters churning beneath billions of pebbles. But as Selwyn Williams makes clear, the Golden Grape is not just the backstory of local Dorset wreckers, the real world of Daphne du Maurier’s Jamaica Inn, but of an even greater scandal: ingenious attempts by Spanish merchants to hide the gold and silver of the Americas, incoming to Seville, from the hands of the king and to profit from his loss.

Before reaching the Casa de Contratación in the capital city of Andalucia, a complex web of ships and wheeler-dealer merchants spirited the king’s gold out of State hands. Ultimately, the Golden Grape is the little known memory of the archaeological world of Spanish contraband trade and the riches that spirited entrepreneurs could make from general goods if they could avoid the pitfalls of privateers and the wrath of God.

The Treasure of the Golden Grape is not the end, it is perhaps the beginning. Somewhere out there lie the physical remains of a fabulous tale that not even Hollywood could make up. Don’t bet against Selwyn Williams and his team turning up archaeological gold.