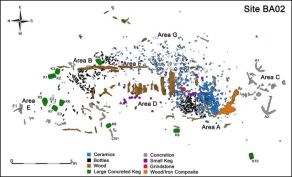 Just published – the first two reports by Odyssey Marine Exploration on its rescue archaeology on a mid-19th century wreck (Site BA02) lost at a depth close to 370 metres, 70 nautical miles off Jacksonville, Florida.

The wreck was brought to Odyssey’s attention in 2003 by a fisherman, whose nets had snagged ceramic wares over the last 40 years. A small selection of artifacts was recovered in 2003 and the wreck arrested in court. The site was revisited by Odyssey in 2005, when disturbing further impacts were documented, caused by recent dragging of trawl nets in the interim years by shrimp boats seeking fish for America’s booming sushi restaurants. Further diagnostic material culture was recorded in relation to its contexts prior to select recovery to identify and date the site before the wreck became even more extensively disturbed and data lost.

Site BA02 contains the remains of a small American coastal schooner that was transporting a consignment of British ceramics manufactured in Staffordshire in the decade 1850-60 alongside American glass wares and building materials. The most plausible theory is that the ship was lost in a hurricane, with the great storm of September 1854 the most likely candidate.

The vessel appears to have been a two-masted schooner typical of the East Coast’s thriving regional maritime trade based in New York City. The Jacksonville ‘Blue China’ shipwreck reflects the lure of high status, yet relatively cheap, Staffordshire and US products that prevailed across middle class America and permeated down into the lower classes. This is surprisingly the first wreck of any mid-19th century coaster found off America with a substantial cargo and reflects the roots of New York’s original mercantile and economic rise to urban stardom. 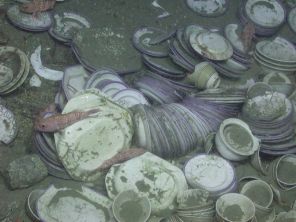