Moby-Dick Wreck Found in the Pacific 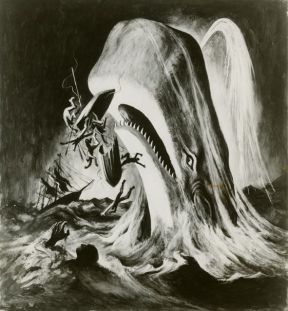 “No mercy, no power but its own controls it. Panting and snorting like a mad battle steed that has lost its rider, the masterless ocean overruns the globe” (Herman Melville, Moby-Dick, 1851).

The ship captained by the man whose adventures at sea inspired one of the great American novels, Herman Melville’s Moby-Dick, has emerged from the battered shallow reef where it sank on 11 February 1823, some 600 miles northwest of Honolulu. The Nantucket whaler the Two Brothers was under the captaincy of George Pollard Jr. when it struck the French Frigate Shoals in today’s Papahānaumokuākea Marine National Monument in the Pacific Ocean, at 139,797 square miles the largest conservation area under the US flag. After abandoning ship, the crew survived a harrowing night by clinging to the ship’s boats, fortunately to be picked up the next morning by another Nantucket whaler.

Just a few years earlier Pollard had earned infamous notoriety in 1819 as captain of another Nantucket whaling vessel, the Essex, which had the ill fortune to be rammed and sunk by an 85 foot-long spermaceti whale in the South Pacific.

As Owen Chase, First Mate of the Essex, would later recount in his Narrative of the Most Extraordinary and Distressing Shipwreck of the Whale-Ship Essex of Nantucket (New York, 1821), “He spouted two or three times, and then disappeared. In less than two or three seconds he came up again, about the length of the ship off… he came down upon us at full speed, and struck the ship with his head, just forward of the fore-chains, he gave us such an appalling and tremendous jar, as nearly threw us all on our faces. The ship brought up as suddenly and violently as if she had struck rock, and trembled for a few seconds like a leaf. We looked at each other with perfect amazement, deprived almost of the power of speech… the ship had settled down a considerable distance in the water, and I gave her up as lost”. During their trials on the sea voyage home, home George Pollard and his crew only survived by resorting to cannibalism as they drifted across an empty sea.

The Two Brothers was part of a fleet of several hundred whaling ships that played a major role in America’s economic and political expansion into the Pacific, transforming the region, including Hawaii, both economically and culturally. This colonialism resulted in the near extinction of many whale species. 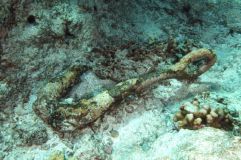 Marine archaeologists identified the scattered wreck, heavily pounded by the waves, through the survival of two large anchors, three cast iron trypots used to melt whale blubber to produce oil, and the remains of part of the ship’s rigging – all typical of the gear used on early 19th-century whalers. The location of the wreckage matched the general location of where the Two Brothers had grounded. The picture was confirmed by recent fieldwork that found blubber hooks, five whaling harpoon tips, three whaling lances, four cast-iron cooking pots and American ceramics and glass wares, confirming the date and nationality of the wreckage.

The 19th-century whaling industry was one of the most prominent businesses in America. By 1846, 736 whalers were based in the ports of southern New England and Long Island. Whales were thought of as swimming oil wells. The waxy oil derived from the head of the sperm whale, spermaceti, was highly prized for making the finest candles in the world. The bones and teeth of various species, meanwhile, were exploited for numerous products from collar stays to buggy whips, toys and even for springs in early typewriters. Baleen from the mouths of some species of whale was the de rigueur fashion accessory for the manufacture of ladies corsets. Whalebone was the plastic of the 1800s.

Dr Kelly Gleason with a ginger jar from the French Frigate Shoals whaler wreck of the Two Brothers, lost in 1823. Photo: NOAA/Greg McFall.