Hot on the heels of the government’s decision to abolish after 30 years of service the crusaders of Britain’s vast submerged heritage, the Advisory Committee on Historic Wreck Sites, the lid to marine archaeology’s limited resource coffers in the UK has closed some more. The ‘white knight’ that was the Aggregates Levy Sustainability Fund will disappear in a puff of smoke in March 2011.

This pot of silver earmarked for reducing the environmental impacts of the extraction of aggregates was a success story for a cog of marine science that has traditionally had to beg for funds at the bottom of the food chain. Gravel dredging is big business. The UK has the largest offshore dredging industry in Europe and is one of the biggest in the world. Figures for 2006 suggest an annual processed sale value of £293 million. The marine aggregates industry operates 28 purpose built dredgers with a total replacement value of £1 billion.

Some 138 square kilometres of the UK’s continental shelf was actively dredged in 2008 to provide aggregate for the building industry. The war chest levy was introduced in April 2002 at a rate of £1.60 per tonne, and since 2009 had stood at £2.00 per tonne to enable the effects of dredging on shipwrecks and submerged prehistoric settlements to be modeled and managed.

According to DEFRA, “We have had to look very carefully across all the Department’s priorities to see where we can make best use of available funds in a very tight spending context. Unfortunately, the Department is no longer in a position to be able to continue the funding of the ALSF programme.” It is unclear how these funds are to be otherwise ‘prioritised’.

All seemed to be running particularly smoothly. The ALSF 2008-11 Evaluation concluded only in 2010 that “The Fund will generally deliver good value for money with potentially more significant gains in the longer term… The ALSF is now a mature programme with considerable momentum behind it, a good reputation and a wide community of interest. In some areas it has an influential European and international profile…” 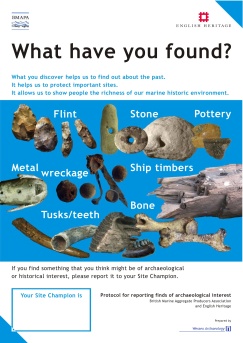 You only have to peer over the sea to Holland’s Flushing wharf, where recent dredging has brought up 16th-century coins, boat and ship fittings, a British aircraft part, anchors and mammoth teeth – all declared to Wessex Archaeology – to see the value of this excellent scheme. In the UK, Wessex Archaeology reported the discoveries in 2009 and 2010 of a Roman mortaria in Licence Area 107 off Lincolnshire and a collection of late 18th-century hallmarked silver dredged from Licence Area 254 bearing the crest of the 6th Earl of Stair, John Dalrymple (1749-1821).

A Mesolithic site of around 8,500 BC off Great Yarmouth only came to light after a Dutch dredger declared the discovery of wood, bone, antler and struck flint. Since 2005 Wessex Archaeology has secured filings on 784 finds dating from the Palaeolithic period to the modern day. Hopefully the Awareness Programme that has so successfully monitored landings of dredged underwater cultural heritage, and generated great interest amongst ‘Site Champions’ on the wharves where the dredgers land, will find another income stream and live on.

Defra’s mission statement says that “We deal with environmental risks and work towards securing a sustainable society and a healthy environment.” What does the latest development tell us about the sustainability and health of underwater cultural heritage? The £2,715,759 that the ALSF allocated English Heritage in 2005 for various multi-year projects may seem like a cheap investment if an intact wooden wreck sunk in the middle of an aggregate licence area demands future rescue excavation. What price the sunken past?